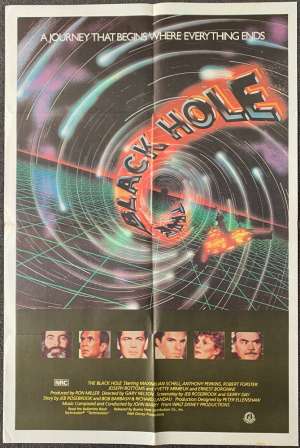 The Black Hole is a 1979 American space opera film directed by Gary Nelson and produced by Walt Disney Productions. The film stars Maximilian Schell, Robert Forster, Joseph Bottoms, Yvette Mimieux, Anthony Perkins, and Ernest Borgnine, while the voices of the main robot characters are provided by Roddy McDowall and Slim Pickens (both uncredited). The music for the film was composed by John Barry. It was the first film from Walt Disney Productions to receive a PG rating. At $20 million, plus another $6 million for the advertising budget, it was at the time the most expensive picture ever produced by Disney. The movie returned a gross profit of 10 million at the North American box office, making it the 21st highest-grossing film of 1979. The New York Times, Time and Variety Critics all praised the film. The visual effects were generally acclaimed by the press. The film received two Academy Award nominations for Best Visual Effects and Best Cinematography.