Being There 1979 One Sheet movie poster Peter Sellers Shirley MacClaine 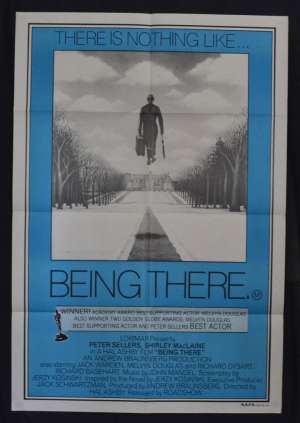 Original Australian One Sheet movie poster. Being There is a 1979 American comedy-drama film directed by Hal Ashby. Its screenplay was adapted by Jerzy Kosiński and the uncredited Robert C. Jones from the 1970 novella by Kosiński. The film stars Peter Sellers, Shirley MacLaine, Melvyn Douglas, Richard A. Dysart, Jack Warden, and Richard Basehart. Douglas won the Academy Award for Best Supporting Actor and Sellers was nominated for Best Actor.The screenplay won the British Academy Film Award for Best Screenplay and the Writers Guild of America Award for Best Comedy Adapted from Another Medium. It was also nominated for the Golden Globe Award for Best Screenplay.The making of the film is portrayed in The Life and Death of Peter Sellers, a biographical film of Sellers' life. In 2015 the United States Library of Congress selected the film for preservation in the National Film Registry, finding it "culturally, historically, or aesthetically significant".