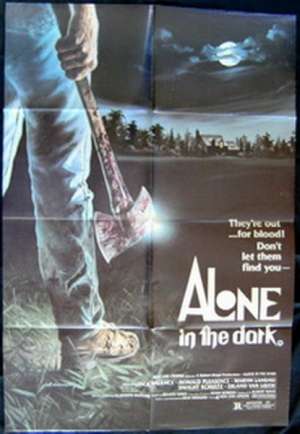 Alone In The Dark Poster Original One Sheet 1982 Jack Palance

Australian One Sheet Poster with chilling artwork by Dave F. Henderson.Alone in the Dark is a 1982 American slasher film directed by Jack Sholder and starring Jack Palance, Donald Pleasence, and Martin Landau. It was the director's debut film as well as an early production of New Line Cinema. The plot concerns a family under siege by four escaped patients during a power blackout. Despite having a quiet theatrical release and initially dismissed by critics, years since its release the film has gained reappraisal and has achieved a cult following. The film has gained notoriety as being one of the more intelligent slasher-themed films of the '80s.Technically speaking, the film was one of the first horror films to be made with Dolby Stereo sound. The advanced sound level would often blow out the speaker systems in older theatres while the movie was being screened. Chilling poster artwork by Dave F. Henderson.