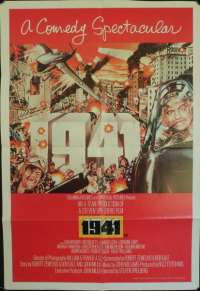 Original Australian One Sheet movie poster. 1941 is a 1979 period comedy film directed by Steven Spielberg, written by Robert Zemeckis and Bob Gale, and featuring an ensemble cast including Dan Aykroyd, Ned Beatty, John Belushi, John Candy, Christopher Lee, Toshiro Mifune, and Robert Stack. Although not as financially or critically successful as many of Spielberg's other films, it received belated popularity after an expanded version aired on ABC and its subsequent home video reissues, raising it to cult status. Co-writer Gale stated the plot is loosely based on what has come to be known as the Great Los Angeles Air Raid of 1942 as well as the bombardment of the Ellwood oil refinery, near Santa Barbara, by a Japanese submarine. Many other events in the film were based on real incidents, including the Zoot Suit Riots and an incident in which the U.S. Army placed an anti-aircraft gun in a homeowner's yard on the Maine coast.