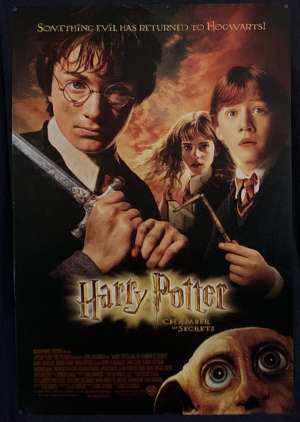 USA One Sheet Poster International Rolled Double Sided (note the complete lack of ratings on the poster).Harry Potter and the Chamber of Secrets is a 2002 fantasy film directed by Chris Columbus and distributed by Warner Bros. Pictures, based on J. K. Rowling's 1998 novel of the same name. The film stars Daniel Radcliffe as Harry Potter, with Rupert Grint as Ron Weasley, and Emma Watson as Hermione Granger. Its story follows Harry Potter's second year at Hogwarts School of Witchcraft and Wizardry as the Heir of Salazar Slytherin opens the Chamber of Secrets, unleashing a monster that petrifies the school's denizens. The cast of the first film returned for the sequel, with the additions of Kenneth Branagh, Jason Isaacs, and Gemma Jones, among others. It was the last film to feature Richard Harris as Professor Albus Dumbledore, due to his death that same year. Principal photography began in November 2001, only three days after the release of the first film. It was shot at Leavesden Film Studios and historic buildings around the United Kingdom, as well as on the Isle of Man. Filming concluded in July 2002. Chamber of Secrets was released in theatres in the United Kingdom and the United States on 15 November 2002. The film became a critical and commercial success, grossing $879 million worldwide.