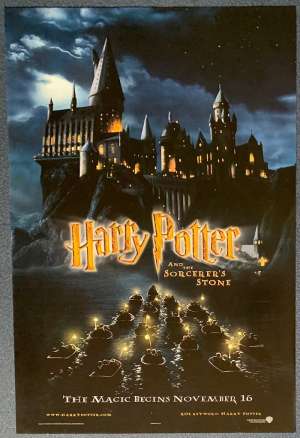 Rare Double sided teaser USA one sheet poster.(note the complete lack of credits on the poster).Harry Potter And The Sorcerer's Stone as it was known in the USA and India (released in all other parts of the world as the Philospoher's Stone) is a 2001 fantasy film directed by Chris Columbus and distributed by Warner Bros. Pictures, based on J. K. Rowling's 1997 novel of the same name. It is the first instalment of the Harry Potter film series and stars Daniel Radcliffe as Harry Potter, with Rupert Grint as Ron Weasley, and Emma Watson as Hermione Granger. Its story follows Harry Potter's first year at Hogwarts School of Witchcraft and Wizardry as he discovers that he is a famous wizard and begins his education. Warner Bros. bought the film rights to the book in 1999 for a reported £1 million ($1.65 million). Production began in the United Kingdom in 2000, with Chris Columbus being chosen to create the film from a shortlist of directors that included Steven Spielberg and Rob Reiner. Rowling insisted that the entire cast be British, with the three leads chosen in August 2000 following open casting calls. The film was shot at Leavesden Film Studios and historic buildings around the United Kingdom, from September 2000 to March 2001.The film was released to cinemas in the United Kingdom and United States on 16 November 2001. It became a critical and commercial success, grossing $974 million at the box office worldwide during its initial run, and over $1 billion with subsequent re-releases. The film was nominated for many awards, including Academy Awards for Best Original Score, Best Art Direction and Best Costume Design.