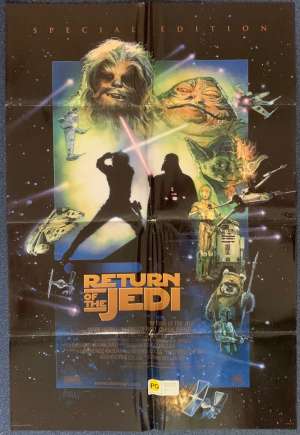 One Sheet Poster with Drew Struzan artwork.In 1997, for the 20th anniversary of the release of Star Wars (re-titled Episode IV: A New Hope), Lucas released the Star Wars Trilogy: Special Edition. Return of the Jedi was re-released on March 7, 1997, with a number of changes and additions, which included the insertion of several alien band members and a different song in Jabba's throne room, the modification of the Sarlacc to include a beak, the replacement of music at the closing scene, and a montage of different alien worlds celebrating the fall of the Empire.Of course a new theatrical poster was released and this is it.