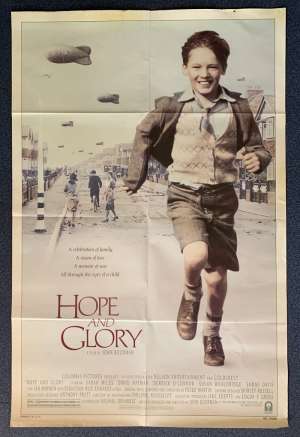 USA One Sheet Poster.Hope and Glory is a 1987 British comedy-drama-war film, written, produced and directed by John Boorman and based on his own experiences of growing up in the Blitz in London during the Second World War. The title is derived from the traditional British patriotic song "Land of Hope and Glory". The film was distributed by Columbia Pictures. The film tells the story of the Rowan family and their experiences of the Blitz as seen through the eyes of the son, Billy (Sebastian Rice-Edwards). The main film set was built on the disused runway at the former Wisley Airfield in Surrey and other scenes by the river were shot near Shepperton Lock. Filming also took place in Hightown Road, Ringwood, Hampshire. The "newsreel" footage shown in the local cinema contains scenes from the 1969 film Battle of Britain.Hope and Glory was a critical and commercial success wining Golden Globe and Bafta Awards. It also was nominated for Academy awards. A sequel to the film, titled Queen and Country, was made in 2014.