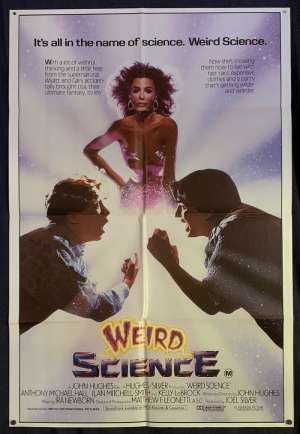 One Sheet Poster with Tom Jung art.Weird Science is a 1985 American teen comic science fiction film written and directed by John Hughes (The Breakfast Club) and starring Anthony Michael Hall, Bill Paxton, Robert Downey Jr and Kelly LeBrock (The Woman In Red). The title is taken from a pre-Comics Code Authority 1950s EC Comics magazine of the same name, and the story’s premise drawn from number 5 entitled “Made of The Future,” to which rights were acquired by the film's producer Joel Silver (The Warriors). The title song was written and performed by American new wave band Oingo Boingo. The film is now regarded as a cult classic. It was successful at the box office, with a gross of $23,834,048 in North America and $15,100,000 in other territories, totalling $38,934,048 worldwide.