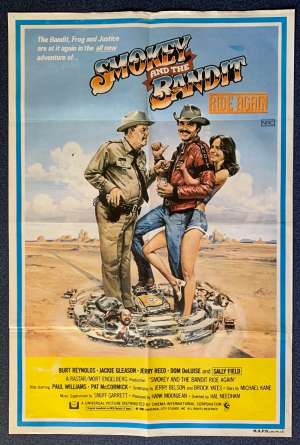 One Sheet Poster with art by Daniel Goozee.Smokey and the Bandit Ride Again is a 1980 American action comedy film directed by Hal Needham, and starring Burt Reynolds, Sally Field, Jerry Reed, Jackie Gleason and Dom DeLuise. The film is the sequel to the 1977 film Smokey And The Bandit. Smokey and the Bandit Ride Again was filmed simultaneously with The Cannonball Run, in which Burt Reynolds and Dom DeLuise also starred. Although ‘The Bandit Again’ sticks to a Pontiac Trans Am, this time a 1980 Turbo model with five colour decals unlike 1981's single colour decals, the Snowman switches to a 1980 GMC General, silver with blue trim with the same mural on the trailer as in the original film. A world-record automobile jump was captured on film during the "roundup sequence", when stuntman Gary Davis jumped a 1974 Dodge Monaco over 150 feet. Davis suffered compressed vertebrae as a result of a hard landing. This film was the eighth-most-popular 1980 film at the United States and Canada box office earning $66,132,626 making it a financial success.