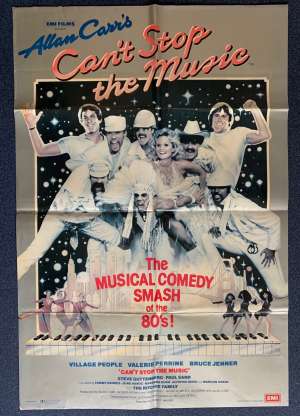 One Sheet Poster.Can't Stop the Music is a 1980 American musical comedy film directed by Nancy Walker. Written by Allan Carr and Bronté Woodard, the film was originally titled Discoland... Where the Music Never Ends. Re-titled ‘Can't Stop The Music’ it was a fictionalised account of the formation of the Village People. Carr announced it as "Singing in the Rain for the disco crowd". It was produced by Thorn EMI Screen Entertainment (formerly EMI Films),and distributed by independent distributor Associated Film Distribution (AFD). Carr had attempted to cast Grease star Olivia Newton-John in the film as Samantha, but after discussions between her producer, John Farrar, and Morali over who would write Newton-John's numbers, Newton-John instead signed on to play the lead in Xanadu. Since its initial release, the film has gained something of a cult status as a camp film. Released on DVD in 2002, the film has been screened at gay film festivals, including the 2008 London Lesbian and Gay Film Festival, and is an annual New Year's tradition on Australian television.