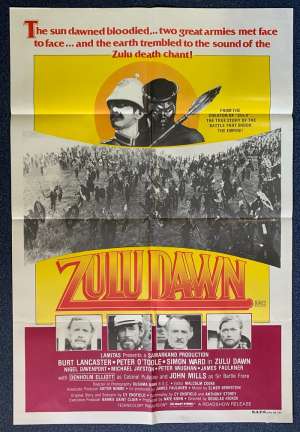 Rare One Sheet Poster.Zulu Dawn is a 1979 war film about the historical Battle of Isandlwana between British and Zulu forces in 1879 in South Africa. The screenplay was by Cy Endfield, from his book, and Anthony Storey. The film was directed by Douglas Hickox. The score was composed by Elmer Bernstein.Zulu Dawn is a prequel to Zulu, released in 1964, which depicts the historical Battle of Rorke's Drift later the same day, and was co-written and directed by Cy Endfield. The Lamitas Property Investment Corporation raised money for the film. They financed a series of films, including several in South Africa, such as The Wild Geese (1978).