Country Of Origin One Sheet Poster.Black Robe is a 1991 biography film directed by Australian Bruce Beresford. The screenplay was written by Irish Canadian author Brian Moore, who adapted it from his novel of the same name. The film's main character, Father LaForgue, is played by Lothaire Bluteau, with other cast members including Australian’s Aden Young and Frank Wilson. It was the first official co-production between a Canadian film team and an Australian one. The storyline was as such: In the 17th century, a Jesuit missionary nicknamed Black Robe by the natives and his small party of companions try reaching the Huron tribe in Canada all while facing mistrust, Iroquois warring parties and harsh winter conditions. Black Robe was shot entirely in the Canadian province of Quebec. Funds were raised to produce the film under a co-production treaty between Canada and Australia. The production needed 30% Australian financing, and the Film Finance Corporation investment had to be spent on Australian elements, such as an Australian crew and two Australian actors. The film won an Australian Film Institute award for Best Cinematography. Black Robe grossed $2,036,056 at the box office in Australia. 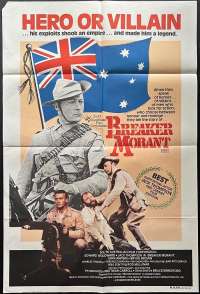