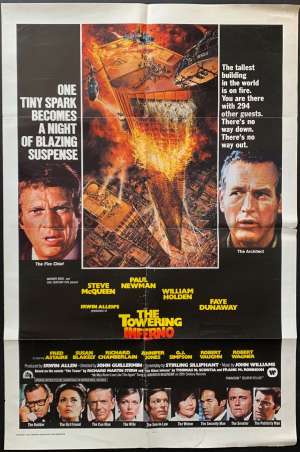 USA International One Sheet Poster.The Towering Inferno is a 1974 American drama disaster film produced by Irwin Allen featuring an ensemble cast led by Steve McQueen and Paul Newman. Directed by John Guillermin, the film is a co-production between 20th Century Fox and Warner Bros., the first to be a joint venture by two major Hollywood studios. The film was the highest-grossing film released in 1974. The picture was nominated for eight Oscars in all, winning three. Fred Astaire received his only Oscar nomination for this film. The score was composed and conducted by John Williams of future Star Wars fame. In addition to McQueen and Newman, the cast includes William Holden, Faye Dunaway, Fred Astaire, Susan Blakely, Richard Chamberlain, O. J. Simpson, Robert Vaughn, Robert Wagner and in her final role, Jennifer Jones. McQueen, Newman, and William Holden all wanted top billing. Holden was refused as he no longer was a top star when compared to McQueen and Newman. To provide dual top billing to the other two, the credits were arranged diagonally, with McQueen lower left and Newman upper right. Thus, each appeared to have "first" billing depending on whether the credit was read left-to-right or top-to-bottom. This was the first time this "staggered but equal" billing was used in a movie.McQueen is mentioned however first in the film's trailers. In the cast list rolling from top to bottom at the film's end, however, McQueen and Newman's names were arranged diagonally as at the beginning; as a consequence, Newman's name is fully visible first there. A casting note, Paul Newman's son Scott played the acrophobic fireman afraid to rappel down the elevator shaft. He would die 4 years later from a drug overdose. Many critics gave the film three out of four stars and praised it as "the best of the mid-1970s wave of disaster films".