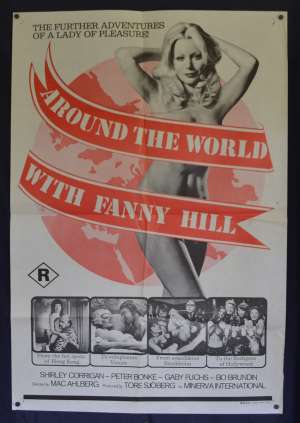 Original Australian One Sheet Poster Around The World With Fanny Hill

Around The World With Fanny Hill is a 1974 Swedish sexploitation film (English Language) directed by Mac Ahleberg and starring in the lead role Shirley Corrigan. The plot was simple but effective: Neglected by her unfaithful husband, an ordinary housewife will see her life change through a joyride of sultry adventures, sensual exploration and pleasure around the world.After a career in directing European erotic films, Mac Ahlberg transitioned to working as a cinematographer in American movies, mostly for director Charles Band (Trancers). The film's cinematographer, Mikael Salomon, would go on to become a leading director of photography in Hollywood, working on such films as The Abyss (1989) (for which he received an Oscar nomination), Far and Away (1992) and Always (1989).