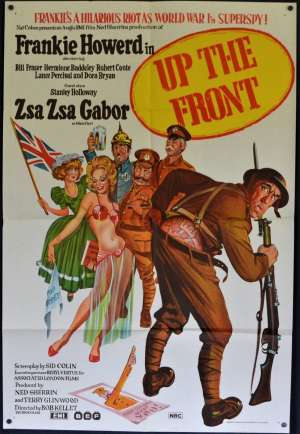 Up The Front Poster Original One Sheet Frankie Howerd Carry On

One Sheet Poster.Up The Front is a 1972 British comedy film directed by Bob Kellett and a screenplay written by Sid Colin (co-writer of Carry On Spying). It starred Frankie Howerd (Carry On Doctor & Carry On Up The Jungle), Bill Fraser, and Hermione Baddeley. It is the third film spin-off from the television series Up Pompeii! (the previous films being Up the Chastity Belt set in the Middle Ages which followed on from the Up Pompeii film). The plot concerns Lurk (a descendant of the slave Lurcio in Up Pompeii), a coward who is hypnotised into bravery. Bob Hoskins' makes a brief appearance in the film, in the role of a recruiting sergeant, this represents the actor's mainstream debut.