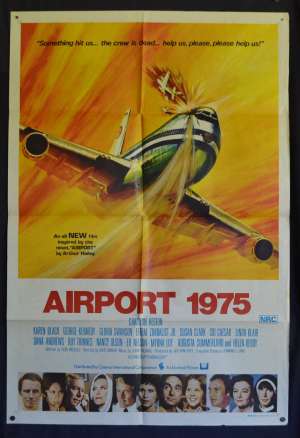 Poster artwork by George Akimoto.Airport 1975 (also known as Airport '75) is a 1974 American air disaster film and the first sequel to the successful 1970 film Airport. Airport 1975 was directed by Jack Smight and starred Charlton Heston, Karen Black, George Kennedy, as well as Gloria Swanson in her final screen appearance. The plot concerns the dramatic events aboard an airborne Boeing 747 when a small aircraft crashes into the cockpit causing the fatalities of senior crew and the blinding of the pilot with no one aboard qualified to take the controls. Airport 1975 used a Boeing 747-123 (which was later converted into a 747 cargo variant) leased from American Airlines when it was temporarily taken out of passenger service at the start of American's restructuring away from the fleet of Boeing jumbo jets. The aircraft was converted into a freighter in 1984 and flew for UPS for over 20 years before being retired to desert storage in 2005 and was eventually scrapped in 2011. As Sister Ruth, Helen Reddy performs a solo acoustic version of her song "Best Friend" (originally on her 1971 debut album I Don't Know How to Love Him) to an ailing Linda Blair. The song was written by Reddy and Ray Burton, who also co-wrote her hit single "I Am Woman". Airport 1975 was a massive commercial success. With a budget of $3 million, the film made over $47 million at the box office, making it the seventh highest-grossing film of 1974 and the year's third highest-grossing disaster film, behind The Towering Inferno and Earthquake.