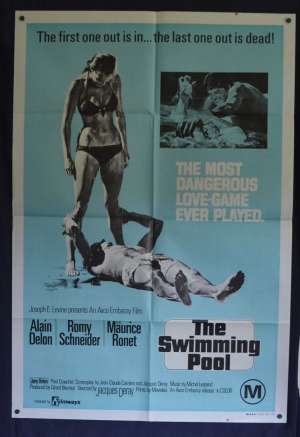 One Sheet Poster.The Swimming Pool (La Piscine) is a 1969 Italian-French film directed by Jacques Deray, starring Alain Delon, Romy Schneider, Maurice Ronet and Jane Birkin.Set in summertime on the Côte d'Azur, it is a drama of sexual jealousy and possessiveness. Both French and English-language versions of the film were made, with the actors filmed speaking English for the international release, which was unusual at a time when movies were always either dubbed or subtitled. That 114-minute international release, shorter than the French version, also had a slightly different editing.The movie was released in the UK as The Sinners and in Italy with twenty minutes cut, it was a commercial success.It was the fourth most popular movie at the French box office in 1969 and The Los Angeles Times called it a "handsome, stunningly designed film".