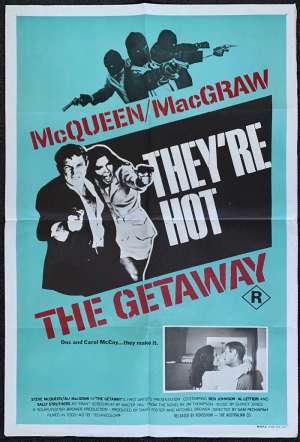 The Getaway is a 1972 American neo-noir crime film directed by Sam Peckinpah and written by Walter Hill, based on the 1958 novel by Jim Thompson. The film stars Steve McQueen, Ali MacGraw, Ben Johnson, Al Lettieri, and Sally Struthers. The plot follows imprisoned mastermind robber Carter "Doc" McCoy (McQueen), whose wife Carol (MacGraw) conspires for his release on the condition they rob a bank in Texas. A double-cross follows the crime and the McCoys are forced to flee for Mexico with the police and criminals in hot pursuit. Peter Bogdanovich, whose The Last Picture Show impressed McQueen and producer David Foster, was originally hired as the director of The Getaway. Thompson came on board to write the screenplay, but creative differences ensued between him and McQueen and he was subsequently fired along with Bogdanovich. When Bogdanovich was to direct, he intended to cast Cybill Shepherd, his then girlfriend, in the role of Carol. As soon as Peckinpah came on to direct, he wanted to cast Stella Stevens with whom he had worked on The Ballad of Cable Hogue (1970), with Angie Dickinson and Dyan Cannon as other possible alternatives. Thus Ali MacGraw was not a first choice by either director. Principal photography commenced on February 7, 1972, on location in Texas. The film reunited McQueen and Peckinpah, both of whom had previously worked together on the relatively unprofitable ‘Junior Bonner’ which was released the same year. The Getaway opened on December 13, 1972 and was a box office hit earning over $36 million. It was the second highest-grossing film of the year, and was one of the most financially successful productions of Peckinpah's and McQueen's careers. Critics today review it extremely well.