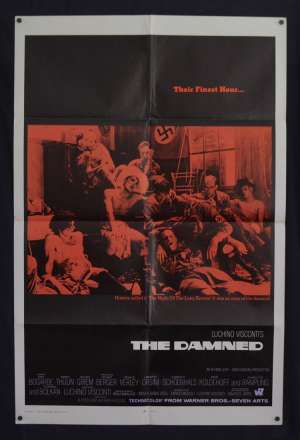 The Damned (Italian title: La caduta degli dei, lit. "The Fall of the Gods") is a 1969 Italian-German historical drama film written and directed by Luchino Visconti. The plot centers on the Essenbecks, a wealthy industrialist family who have begun doing business with the Nazi Party, a thinly veiled reference to the Essen-based Krupp family of steel industrialists. The Italian title is the conventional translation of the term Götterdämmerung (with its Wagnerian association), but for the German version, the title Die Verdammten ("The Damned") was chosen. All versions use Götterdämmerung as a subtitle, however. The Damned has often been regarded as the first of Visconti's films described as "The German Trilogy, followed by Death in Venice (1971) and Ludwig (1973). The film opened to worldwide acclaim It received an Oscar nomination for Best Screenplay and was named Best Foreign Film by the National Board of Review. Among the international cast, Helmut Berger was singled out for his performance as Martin, a vicious sexual deviant who uses his amoral appetites to his own twisted ends. The film was the tenth most popular movie at the French box office in 1970. The film has appeared on critics' lists such as the New York Times Best 1000 Movies Ever Made. Filmed in Italy and Germany, the film was given an "X" rating by the MPAA and was heavily edited when shown on CBS television late night.