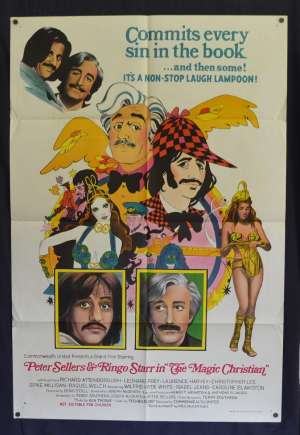 One Sheet Poster.The Magic Christian is a 1969 British satirical black comedy film directed by Joseph McGrath and starring Peter Sellers and Ringo Starr. John Lennon was originally intended to play the role of the orphan but it went to Ringo instead.Paul McCartney wrote the songs that were featured on the soundtrack and were performed by the band Badfinger (who were signed to the Beatles record company Apple). Other star appearances included John Cleese, Graham Chapman, Raquel Welch, Spike Milligan, Christopher Lee, Richard Attenborough, Roman Polanski and Yul Brenner. It was loosely adapted from the 1959 comic novel of the same name by American author Terry Southern, who co-wrote the screenplay adaptation with McGrath. The official soundtrack album featured other music as well; Badfinger released an album with its songs for the film, Magic Christian Music.  The movie is often remembered for its song "Come and Get It",written and produced by Paul McCartney and performed by Badfinger. In popular culture today writer Grant Morrison named The Magic Christian as an inspiration for his Batman Incorporated series. The poster is now a collector’s item due to the Beatles connection.