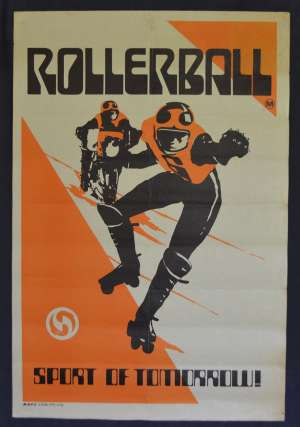 Rare Poster Faux Artwork.Rollerball is a 1975 science fiction sports film directed and produced by Norman Jewison. It stars James Caan, John Houseman, Maud Adams, John Beck, Moses Gunn and Ralph Richardson. The screenplay, written by William Harrison, adapted his own short story, "Roller Ball Murder", which had first appeared in the September 1973 issue of Esquire. Although Rollerball had an American cast, a Canadian director, and was released by the American company United Artists, it was produced in London and Munich. Recognizing their contribution to the film's many crucial action sequences, Rollerball was the first major Hollywood production to give screen credit to its stunt performers. The game of Rollerball was so realistic the cast, extras, and stunt personnel played it between takes on the set. The film took 30 million at the box office and now enjoys a cult following.