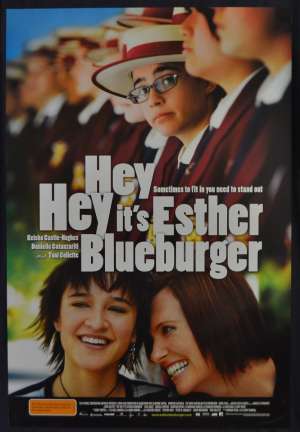 One Sheet Poster.Hey Hey It's Esther Blueburger is a 2008 Australian independent teen film written and directed by Cathy Randall. It stars Danielle Catanzariti, Keisha Castle-Hughes and Toni Collette. The film follows Jewish 13-year-old Esther (Catanzariti), an outcast at her posh school, where she has no friends. That changes when she meets nonconformist Sunni (Castle-Hughes) from the local public school.The film premiered on 10 February 2008 at the Berlin International Film Festival and was released in Australia on 20 March 2008. A number of critics praised the originality and the acting. Catanzariti won the Australian Film Institute's Young Actor Award for her performance, and the film received a further three AFI nominations and a nomination for a Film Critics Circle of Australia Award.