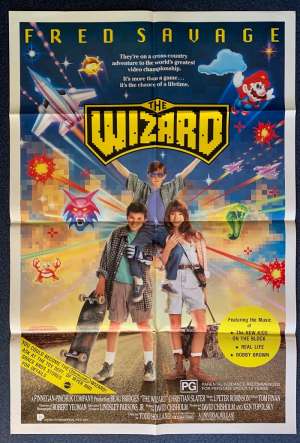 One Sheet Poster.The Wizard is a 1989 American adventure comedy-drama family film directed by Todd Holland, written by David Chisholm, and starring Fred Savage, Christian Slater, Jenny Lewis, Beau Bridges and Luke Edwards. It was also Tobey Maguire's film debut. The Wizard is famous for its numerous references to video games and accessories for the Nintendo Entertainment System and has been called a feature-length commercial. The film was also well known for being North America's introduction to what would become one of the best-selling video games of all time, Super Mario Bros. 3.Over time, the film has gained something of a cult following.