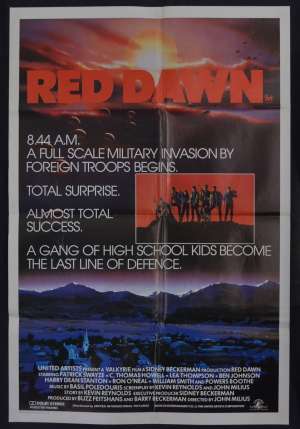 Red Dawn is a 1984 American war film directed by John Milius and co-written by Milius and Kevin Reynolds. It stars Patrick Swayze, C. Thomas Howell, Lea Thompson, Charlie Sheen, and Jennifer Grey. It is notable for being the first film to be released in the US with a Motion Picture Association of America PG-13 rating. The film is set in an alternate 1980s in which the United States is invaded by the Soviet Union and its Cuban and Nicaraguan allies. However, the onset of World War III is in the background and not fully elaborated. The story follows a group of American high school students who resist the occupation with guerrilla warfare, calling themselves Wolverines, after their high school mascot.