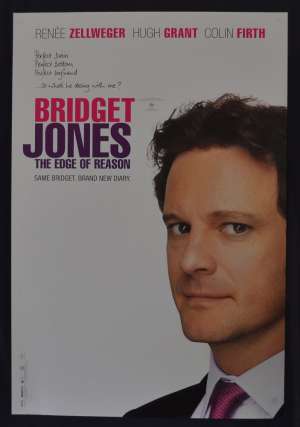 Rare Original Australian Advance Rolled One Sheet movie poster. Bridget Jones: The Edge of Reason is a 2004 British-American romantic comedy film directed by Beeban Kidron and written by Adam Brooks, Richard Curtis, Andrew Davies, and Helen Fielding. It stars Renée Zellweger as Bridget Jones, Colin Firth as Mark Darcy, and Hugh Grant as Daniel Cleaver. Released in the United Kingdom on 12 November 2004 and in the United States a week later on 19 November 2004 it was a box office success, grossing over $260 million worldwide. Voted Evening Standard Readers' Film of 2004, it was in the shortlist for the Orange Film of the Year award at 2005 BAFTAs and the second interpretation of Bridget gained Zellweger another Golden Globe nomination and the People's Choice Award as Favourite Leading Lady of 2005.