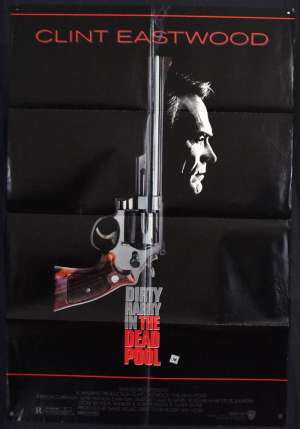 USA One sheet Poster.The Dead Pool is a 1988 American action film directed by Buddy Van Horn, written by Steve Sharon, and starring Clint Eastwood as Inspector "Dirty" Harry Callahan. It is the fifth and final film in the Dirty Harry film series, set in San Francisco, California. It co-stars Liam Neeson, Patricia Clarkson and Jim Carrey (in his first action dramatic role), each of whom eventually went on to greater film fame. It is the only film in the series to not feature Albert Popwell, an actor who had played a different character in each of the previous four films.