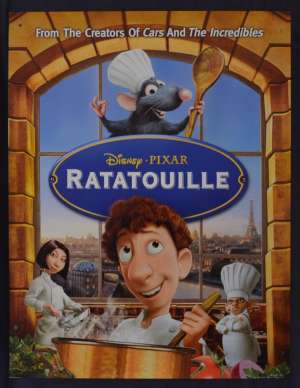 Original DVD movie poster (trimmed). Ratatouille is a 2007 American computer-animated comedy film produced by Pixar and released by Buena Vista Pictures Distribution for Disney. It is the eighth film produced by Pixar. The title refers to a French dish, "ratatouille", which is served at the end of the film and is also a play on words about the species of the main character. The plot follows a rat named Remy, who dreams of becoming a chef and tries to achieve his goal by forming an alliance with a Parisian restaurant's garbage boy.The film grossed $620.7 million at the box office and received critical acclaim. The film won the Academy Award for Best Animated Feature, and was later voted one of the 100 greatest motion pictures of the 21st century by a 2016 poll of international critics conducted by BBC.