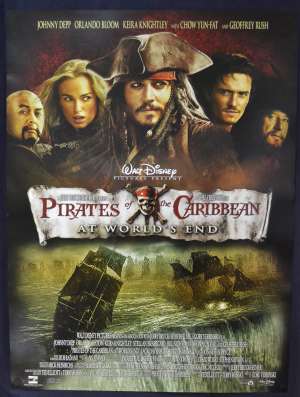 Original DVD Poster (trimmed). Pirates of the Caribbean: At World's End is a 2007 American epic fantasy swashbuckler film directed by Gore Verbinski and starring Johnny Depp, Geoffrey Rush, Orlando Bloom & Keira Knightley is the third instalment of the Pirates of the Caribbean film series. It is the last film in the series to be directed by Verbinski. It was filmed in two shoots during 2005 and 2006, the former simultaneously with the preceding film, Dead Man's Chest. With a production budget of $300 million, Pirates of the Caribbean: At World's End was the most expensive film ever made at the time of its release, even after adjusting for inflation. The film was praised for its performances, musical score, action scenes, and special effects. At World's End was a box office hit, becoming the most successful film of 2007, with over $960 million worldwide. It was nominated for the Academy Award for Best Makeup and Hairstyling and the Academy Award for Best Visual Effects.