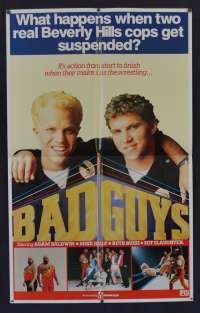 Rare Filmways Australian cinema poster Style B artwork. Bad Guys 1986, Stars Adam Baldwin, Mike Jolly and Michelle Nicastro. Two hot shot LAPD cops get in hot water after breaking up a fight at a local bar. They get suspended from the force and have to find a way to pay the rent. First they try construction work, then stripping, but newspaper reporter Janice Edwards has a really good idea...professional wrestling. A rival manager, Lord Percy, does not like her new team, The Boston Bad Guys (the cops) and will do anything he can to keep them from appearing on the same card as his team, the Kremlin Crushers. Still, the Bad Guys want to get revenge on the Krushers.