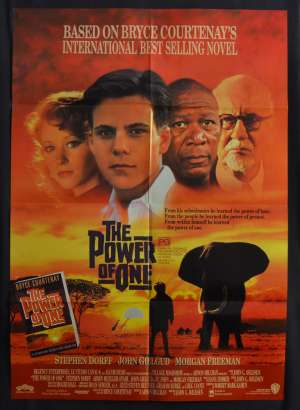 Original One Sheet Movie Poster The Power Of One

One Sheet Poster. The Power Of One is a 1992 American drama film based on Bryce Courtenay's 1989 novel of the same name. Set in South Africa during World War II, the film centers on the life of Peter Philip 'Peekay or PK' Kenneth-Keith, a South African boy raised under apartheid, and his conflicted relationships with a German pianist, a Coloured boxing coach and an Afrikaner romantic interest. Directed and edited by John G. Avildsen, the film stars Stephen Dorff, John Gielgud, Morgan Freeman, Armin Mueller-Stahl and featured (a then-unknown) Daniel Craig in his film debut.