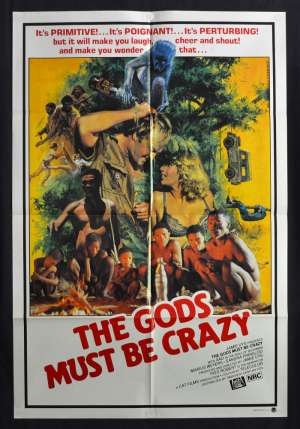 Original Australian One sheet movie poster - Character artwork. The Gods Must Be Crazy is a 1980 South African comedy film written and directed by Jamie Uys. Financed only from local sources, it is the most commercially successful release in the history of South Africa's film industry. For the film's overseas release, the original Afrikaans dialogue was dubbed into English, and voice over work was provided for !Kung and Tswana lines. At the time, it broke all box office records in Japan and it broke all box office records for a foreign film in the United States. Originally released in 1980, the film is the first in The Gods Must Be Crazy series. It is followed by one official sequel and three unofficial sequels produced in Hong Kong.