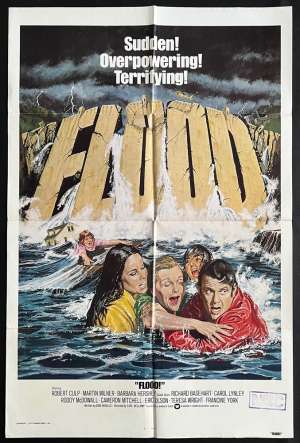 Original USA One Sheet movie poster in near mint condition.Flood is a 1976 American made-for-television (although it did get a theatrical release in other parts of the world) adventure film directed by Earl Bellamy and produced by Irwin Allen. It starred Martin Milner, Barbara Hershey, Richard Basehart, Robert Culp and Roddy Mcdowall, Cameron Mitchell and Eric Olsen. Actors Martin Milner, 'Cameron Mitchell' and 'Eric Olsen' all starred in Irwin Allen's short-lived Swiss Family Robinson (1975) series, which was off-the-air earlier in 1976. This TV movie was Irwin Allen's first project with Warner Bros. Studios after having moved over from 20th Century-Fox, where he had mastered both mediums of television and films for sixteen years.Like most disaster films it has gone onto have a cult following.