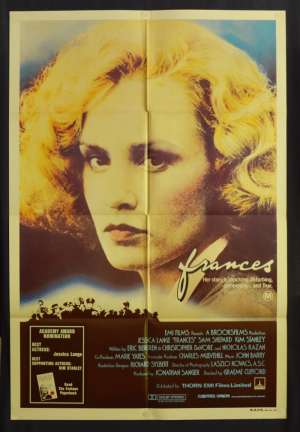 Frances is a 1982 American biographical film starring Jessica Lange as actress Frances Farmer. Kim Stanley, Sam Shepard and Kevin Costner (to a lessor extent) appeared in supporting roles. The film chronicles Farmer's life from 1930s high school student, her short lived film career in the 1930s, her 1940s institutionalization for alleged mental illness and her 1950s deinstitutionalization and appearance on This Is Your Life. Directed by Graeme Clifford, the story was written for the screen by Eric Bergren, Christopher De Vore, and Nicholas Kazan (son of Elia Kazan, who worked with the real Frances Farmer in several plays), based upon William Arnold's Shadowland, a fictional biography of Farmer. Mel Brooks was executive producer of the film, but received no credit for his participation. Frances was nominated for Academy Awards for Best Actress in a Leading Role (Jessica Lange) and Best Actress in a Supporting Role (Kim Stanley).