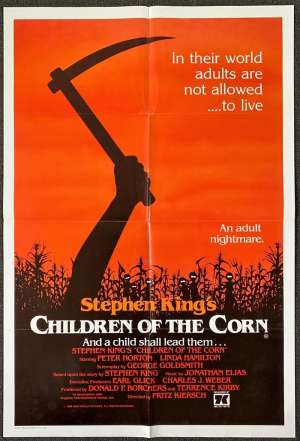 Original One Sheet movie poster Children of the Corn.

Children Of The Corn (also known as Stephen King's Children of the Corn) is a 1984 American horror film based upon the 1977 short story of the same name by Stephen King. Directed by Fritz Kiersch, the film's cast consists of Peter Horton, Linda Hamilton, John Franklin, Courtney Gains, Robby Kiger, Anne Marie McEvoy, and Julie Maddalena. King wrote the original draft of the screenplay, which focused more on the characters of Burt and Vicky and depicted more history on the uprising of the children in Gatlin. This script was disregarded in favour of George Goldsmith's screenplay, which featured more violence and a more conventional narrative structure. The film now enjoys a cult following.