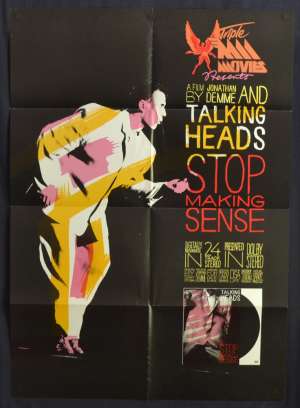 Stop Making Sense is a 1984 concert film featuring a live performance by Talking Heads. Directed by Jonathan Demme, it was shot over the course of three nights at Hollywood's Pantages Theater in December 1983, as the group was touring to promote their new album Speaking in Tongues. The movie is notable for being the first made entirely using digital audio techniques. The band raised the budget of $1.2 million themselves. The title comes from the lyrics of the song "Girlfriend Is Better": "As we get older and stop making sense...". The film has been hailed by Leonard Maltin as "one of the greatest rock movies ever made"and Pauline Kael of The New Yorker described it as "...close to perfection."