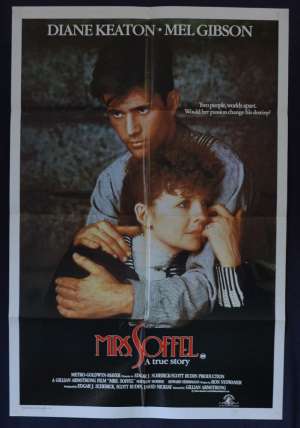 Original Australian One Sheet movie poster.Mrs. Soffel is a 1984 American drama film directed by Gillian Armstrong, starring Diane Keaton and Mel Gibson and based on the story of condemned brothers Jack and Ed Biddle, who escaped prison with the aid of the warden's wife, Kate Soffel. It was filmed on location in and around the Serez family farm in Mulmer, Ontario, as well as Wisconsin (train sequences) and establishing shots in Pittsburgh. The jail sequences were filmed in both the Allegheny County Courthouse and old Allegheny County Jail. The film was entered in the 35th Berlin International Film Festival. ‘The New York Times’ praised Keaton’s and Gibson’s performance in the film.