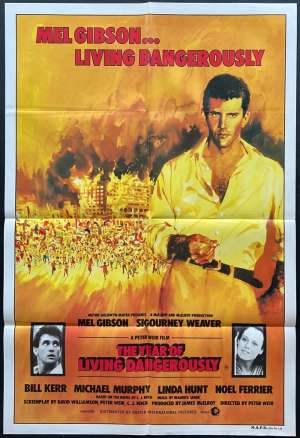 Country Of Origin One Sheet Poster The Year Of Living Dangerously

One Sheet Poster Art by Noel Stapleton.The Year of Living Dangerously was directed and co-written by Peter Weir. David Williamson also wrote the screenplay that was adapted from Christopher Koch's 1978 novel of the same name. The film stars Mel Gibson as an Australian journalist, and Sigourney Weaver as a British Embassy officer. It also stars Linda Hunt as the male dwarf Billy Kwan, Hamilton's local photographer contact, a role for which Hunt won the 1983 Academy Award for Best Supporting Actress.The film was shot in both Australia and the Philippines and includes Australian actors Bill Kerr as Colonel Henderson and Noel Ferrier as Wally O'Sullivan.A number of filmmakers were interested in buying the rights to Christopher Koch's novel including Phillip Noyce (Patriot Games). It was one of the first co-productions between Australia and a Hollywood studio – MGM. Although originally set to be filmed in Jakarta, permission to film in Indonesia was denied, so the bulk of the film was shot in the Philippines. Death threats against Weir and Gibson from Muslims who believed the film would be anti-Islam then forced the production to move to Australia. Gibson downplayed the death threats, saying, "It wasn't really that bad. We got a lot of death threats to be sure, but I just assumed that when there are so many, it must mean nothing is really going to happen. I mean, if they meant to kill us, why send a note? For their work in the film, Weir was nominated for the Palme d'Or at the 1983 Cannes Film Festival and Hunt won the Academy Award for Best Supporting Actress, becoming the first person to win an Oscar for playing a character of the opposite sex.