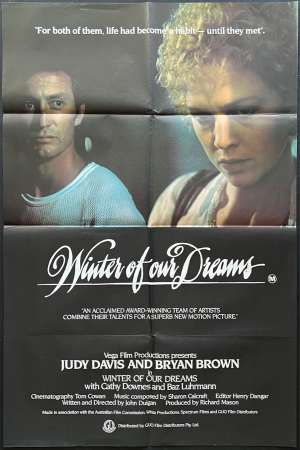 Original One Sheet Movie Poster - Winter Of Our Dreams.Winter of Our Dreams is a 1981 Australian film directed by John Duigan. Judy Davis won the Best Actress in a Lead Role in the AFI Awards for her performance in the film. The film was nominated in 6 other categories also. It was also entered into the 13th Moscow International Film Festival where Judy Davis won the award for Best Actress. Winter of Our Dreams was popular, grossing $959,000 at the box office in Australia, which is equivalent to $3,107,160 in 2009 dollars. A young Baz Luhrmann also makes an acting appearance.