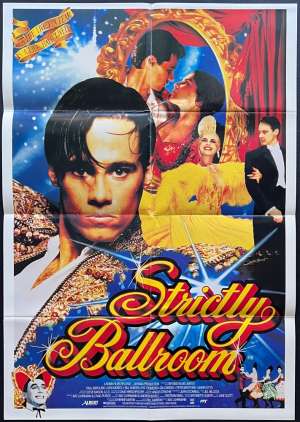 Rare Original Country Of Origin One Sheet Movie Poster. Strictly Ballroom is a 1992 Australian romantic comedy film directed and co-written by Baz Luhrmann. The film, which was Luhrmann's first, is the first in his The Red Curtain Trilogy of theatre-motif-related films; it was followed by Romeo + Juliet and Moulin Rouge! Strictly Ballroom is based on a critically acclaimed stage play originally set up in 1984 by Luhrmann and fellow students while he was studying at the National Institute of Dramatic Arts in Sydney. At the 1992 AFI awards, it gained 13 nominations and won eight major categories. It was also a major success at the 1993 BAFTA awards, gaining eight nominations and winning three awards for 'Best Costume Design', 'Best Original Film Score' and 'Best Production Design'. Strictly Ballroom grossed AUD $21,760,400 at the box office in Australia and a further USD $11,738,022 in the United States. Worldwide, it eventually took AUD$ 80 million at the box office, making it one of the most successful Australian films of all time.