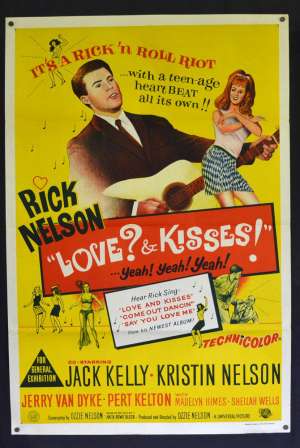 Very Rare Original Australian One Sheet movie poster.Love & Kisses is a 1965 American comedy film starring Ricky Nelson as a young man who tries to grow up and emancipate himself from his middle-class parents by getting married. Based on the 1963 stage play of the same name by Anita Rowe Block,the film was written, produced and directed by Nelson's father, Ozzie Nelson. Singer-songwriter Sonny Curtis was hired to write two songs for the film, "Love and Kisses" and "Say You Love Me" with Kristen Nelson in mind. Ricky Nelson recorded the songs which were released as singles. To promote the film and the songs, Nelson performed them on the television series Shindig! on November 13, 1965.