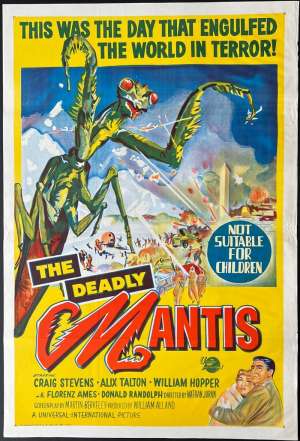 The Deadly Mantis is a 1957 science-fiction monster film produced by William Alland for Universal-International. It was directed by Nathan Juran from a screenplay by Martin Berkeley based on a story by producer William Alland. The film stars Craig Stevens, William Hopper, Alix Talton, and Pat Conway. The film was released in 1957 as a double feature with the spy film The Girl in the Kremlin. The website Atomic Monsters looked at the film in a somewhat positive light, giving it a radioactive rating of 5 atomic blasts out of 5! To create the film's special effects, a 200-foot (61 m) by 40-foot (12 m) long papier-maché model of a Mantis, with a wingspan of 150 feet (46 m) and fitted with a hydraulic system, was built. Two smaller models were also built, one that was 6 feet (1.8 m) long, and another than was 1 foot (0.30 m) long; these were used for the scenes where the mantis walked or flew. Shots of a real Praying Mantis were used for the scene in which the deadly mantis climbs the Washington Monument. The film now enjoys a huge cult following and the poster is very rare.