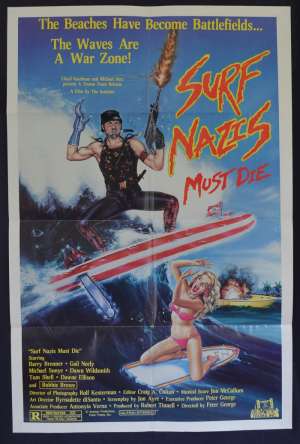 Surf Nazis Must Die is a 1987 American comedy film directed by Peter George and starring Gail Neely, Barry Brenner, and Robert Harden. It was produced by The Institute, a production company formed by George, Craig A. Colton and Robert Tinnell, and distributed by Troma Entertainment, a company known for its low-budget exploitation films. The soundtrack to Surf Nazis Must Die was scored by Jon McCallum and features heavy use of synthesizers. The soundtrack had an official vinyl release by Strange Disc records in September 2014 with cover artwork also by McCallum.