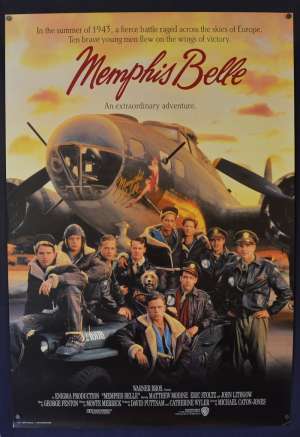 Original Australian rare Rolled One Sheet movie poster. Memphis Belle is a 1990 film directed by Michael Caton-Jones and written by Monte Merrick. The film featured an all-star cast with Matthew Modine, Eric Stoltz, Billy Zane and Harry Connick Jr. (in his film debut) in leading roles. Memphis Belle is a fictionalization story of the 1943 documentary Memphis Belle: A Story of a Flying Fortress by director William Wyler, about the 25th and last mission of an American Boeing B-17 Flying Fortress bomber, the Memphis Belle, based in England during World War II.The 1990 version was co-produced by David Puttnam and Wyler's daughter Catherine, and dedicated to her father. The film closes with a dedication to all airmen, friend or foe, who fought in the skies above Europe during World War II.