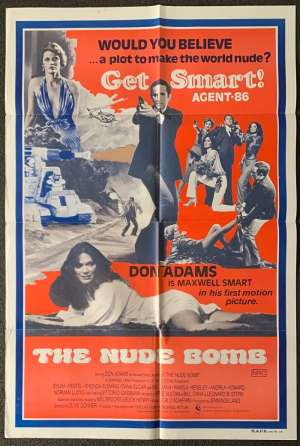 The Nude Bomb One Sheet Movie Poster Original Get Smart

One sheet Poster.The Nude Bomb (also known as The Return of Maxwell Smart or Maxwell Smart and the Nude Bomb) is a 1980 comedy film based on the television series Get Smart.It stars Don Adams as Maxwell Smart, Agent 86, and was directed by Clive Donner.It was retitled The Return of Maxwell Smart for television.Nearly a decade later another revival film was produced, this time for TV, on ABC. Get Smart, Again! would feature most of the surviving original cast members. A feature film remake of the series starring Steve Carrel (agent 86) and Anne Hathaway (agent 99) was a box office success in 2008 - it grossed $230,685,453 worldwide. The Nude Bomb now enjoys a cult following.