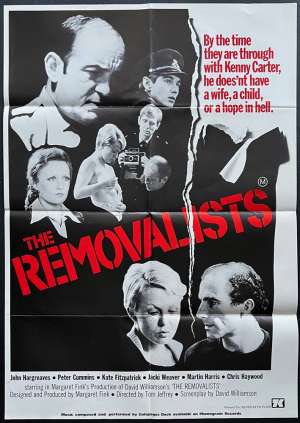 The Removalists Poster Original One Sheet 1971 Country Of Origin

One Sheet Poster Rare Country Of Origin.The Removalists is a play written by Australian playwright David Williamson in 1971. It was turned into a film in 1975. Film rights to the play were bought by Margaret Fink. She originally wanted Roman Polanski to direct and Robert Mitchum to star but this proved impossible. She called Tom Jeffrey for names of directors in his capacity as head of the Producers and Directors Guild of Australia and he expressed his own interest at directing. Fink saw 'Pastures of the Blue Crane' and hired him.The Australian Film Development Corporation put up half the budget in the form of a two-year loan. The main stars of the film were Peter Cummins as Simmonds, John Hargreaves as Ross, Kate Fitzpatrick as Kate, Jacki Weaver as Fiona, Martin Harris as Kenny, and Chris Haywood as the Removalist. Posters of this size for this title rarely become available.