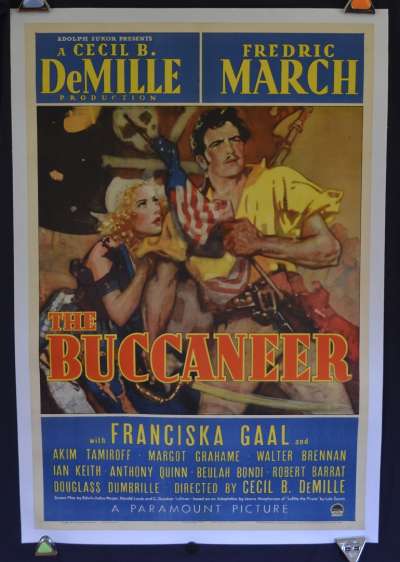 USA One Sheet Poster.The Buccaneer 1938 was made by Paramount Pictures based on Jean Lafitte and the Battle of New Orleans during the War of 1812. It was produced and directed by Cecil B. DeMille from a screenplay by Harold Lamb, Edwin Justus Mayer and C. Gardner Sullivan adapted by Jeanie Macpherson from the novel Lafitte the Pirate by Lyle Saxon. The film stars Fredric March as Lafitte, Franciska Gaal and Akim Tamiroff with Margot Grahame, Walter Brennan, Ian Keith, Spring Byington, Douglass Dumbrille, Beulah Bondi and Anthony Quinn in supporting roles.