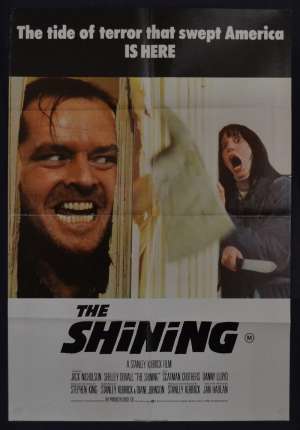 Original British One sheet poster The Shining.The Shining is a 1980 horror film produced and directed by Stanley Kubrick and co-written with novelist Diane Johnson. The film is based on Stephen King's 1977 novel The Shining. Starring Jack Nicholson, Shelley Duvall and Danny Lloyd, it is widely regarded as one of the greatest horror films ever made. American director Martin Scorsese ranked it one of the 11 scariest horror movies of all time. Critics, scholars, and crew members (such as Kubrick's producer Jan Harlan) have discussed the film's enormous influence on popular culture.