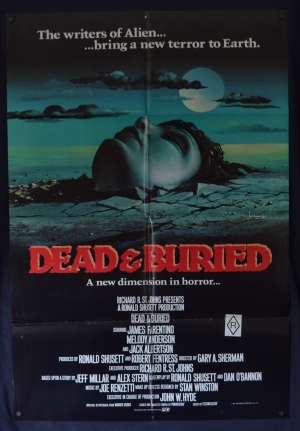 Poster artwork by Campanile.Dead & Buried is a 1981 American horror film directed by Gary Sherman, starring Melody Anderson, Jack Albertson, Robert Englund and James Farentino. It is Albertson’s final live action film role before his death six months after the film’s release (his real final film, The Fox and the Hound was an animated film). The film focuses on a small town wherein a few tourists are murdered, but their corpses begin to reanimate. With a screenplay written by Dan O'Bannon and Ronald Shusett, the movie was initially banned as a "video nasty" in the U.K. in the early 1980s, but was later acquitted of obscenity charges and removed from the Director of Public Prosecutions' list. The film has received praise from critics regarding Stan Winston's special effects and Albertson's performance. In addition to the film being subsequently novelized by Chelsea Quinn Yarbro, the film has obtained a cult following in the years since its release.