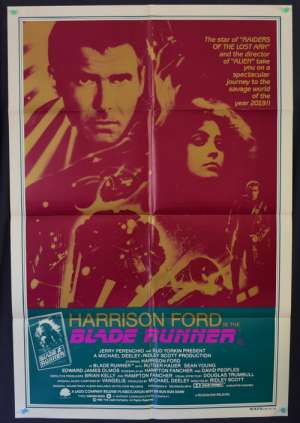 One Sheet Poster.Blade Runner is a 1982 neo-noir science fiction film directed by Ridley Scott and starring Harrison Ford, Rutger Hauer and Sean Young. The film is set in a dystopian future Los Angeles of 2019, in which synthetic humans known as replicants are bio-engineered by the powerful Tyrell Corporation to work on off-world colonies. When a fugitive group of Nexus-6 replicants led by Roy Batty (Hauer) escapes back to Earth, burnt-out cop Rick Deckard (Ford) reluctantly agrees to hunt them down. Blade Runner initially underperformed in North American theaters and polarized critics; some praised its thematic complexity and visuals, while others were displeased with its slow pacing and lack of action. It later became an acclaimed cult film regarded as one of the all-time best science fiction films. Hailed for its production design depicting a "retrofitted" future, Blade Runner is a leading example of neo-noir cinema. The soundtrack, composed by Vangelis, was nominated in 1983 for a BAFTA and a Golden Globe as best original score. The film has influenced many science fiction films and television series. Seven versions of Blade Runner exist as a result of controversial changes requested by studio executives. A director's cut was released in 1992 after a strong response to test screenings of a work print. In 2007, Warner Bros. released The Final Cut, a 25th-anniversary digitally remastered version; the only version over which Scott retained artistic control.